Here are the artists performing in 2013 - come back later for more info on them... 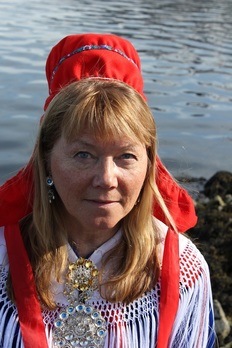 Berit Alette Mienna
Sami joiker who was born and lives in Karasjok, Finnmark, Norway —
‘Joik’ is a name given to traditional Sami singing, and according to musicologists it is one of the longest living style of folk music in Europe.  The sound is comparable to the traditional chanting within First Nations communities in North America.

— Where did you grow up?


Until I was seven years old I growed up in a really small village named, Jergul in Karasjok. It´s north in Norway at the sami countryside. Jergul was then a place without roads, only paths and the river Iešjohka as kind of a mindstreet both summer and wintertime.

We where 5-7 sami families living there, each familiy with 6-11 children. All had to stay at boarder shcool from seven years old. We visited our families five times in a year. In the summertime we were only two families in Jergul, grandmother and some travellers used to visit our guesthouse, Jergul Fjellstue. The other sami famiies moved with there raindeer to coastside.

The nature in north gives greats contrasts. The wintertime, two months without seeing the sun, but with wonderful wawing northern lights, stars, moon and white snow. The normaly could be very cold, often between -20 and -40 degrees Celsius.

And some summerdays could be +20 to + 30C with brights evenings and nights. North of the polar circle, the sun could be shining day and night, and the nature `called`both the children and the adults to stay outside, fishing and rowing along the river, bathing, sitting by the fire making food and telling stories. Or only to be their.

The parents didn´t always have time to look after the children, therefore they told stories to learn the children to behave carefully in riverboats, by the riverside and to take care of the nature, birds, animals, trees and each other.

Instead of kindergarden the adult used stories to ´educate´ their children.

From I was seven year I began at boarding school, seven hours away from home transported in a trailer after a tractor through the nature. There we lived to-three months before we could go home again to visit the family. We where sami people, but the schoolsystem was ´built´ on norwegian values, language, history, sewing, food and so on. We did never hear sami stories and joiks in the classroom. But in the evenings, when the lights was turned off and we should sleep, then we told the old stories to each other. First when I became 14 year, I began to practice joik outside our community with other girls in the boarder school.

How did you become a storyteller/musician?

I was borned in to a storytelling and joiking family and society. From my mother I got my own story early, how I came to this world. I was one of the first teahcers who started to learn schoolpupils to joik. And when I asked my mother if I could teach the children her personaly joik, she answered: «Of course, let them joik so much as they want. And Biret, you have to learn people our stories and also learn them to joik.» These words have given me the power to continue our tradition.

— What is so magic about storytelling?

The stories can show you path in this world and open the doors to the hearts, understanding, feelings and to know your self. And the stories touches something very deeply, touching our roots.


Berit Alette will be performing at Once Upon a Journey... on the Saturday evening at 8pm and also telling stories as a part of the Story Walks on Sunday Oct 20th from 2-4.30pm. All events are at Melvich Village Hall. 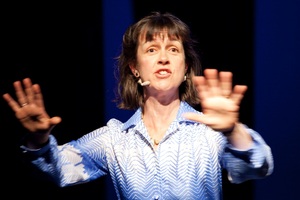 Georgiana Keable
Living now in Norway.
--Where did you grow up?

--Tell us of an interesting custom of your country/region…

The rag and bone man used to come around Portobello road where I grew up to collect rags and bones. There was a knife and scissor man who came round to sharpen up your knives, and an onion seller on a bicycle.

How did you become a storyteller/musician?

My mum is from Switzerland so she always told us stories. From Grimm, from the Bible, from Tibet, from Ireland. She told so I never remember her telling, just the stories, many of which I still tell.

What is so magic about storytelling?

Its not yet been discovered by science exactly what can happen, but when you are there its so strong you can almost touch it....
Last summer, walking over the islands of Lofoten, Vesterålen and Senja with a hammock and asking for stories.


Georgiana will be performing at Once Upon a Journey... on the Saturday evening at 8pm and also telling stories as a part of the Story Walks on Sunday Oct 20th from 2-4.30pm. All events are at Melvich Village Hall. 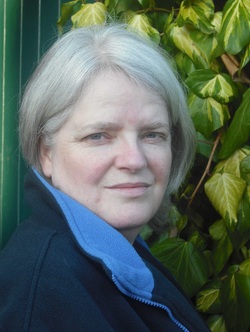 
A local Gaelic radio broadcaster, singer and writer will tell Gaelic tales. May even be persuaded to sing. A brief English summary can be provided. Christine is the 2012 Traditional Gaelic Song gold medallist in the Royal National Mòd and has also been awarded one of the Gaelic New Writers Awards, which is a collaborative project between The Scottish Book Trust and the Gaelic Book Council to work on two books.

One of Christines poems, Gann de Ghaisgich, has just been announced as a winner in the Wigtown Gaelic Poetry competition. Congratulations!! See poem at bottom of this page.


Christine is performing on Friday night at the Trad Ceilidh and on Sat night at Once upon a Journey.... She will also lead a Gaelic story workshop on the Sat afternoon but only if there are pre-bookings. Call 07599760798 to book places. 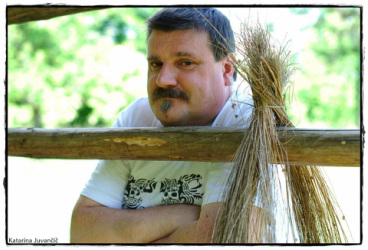 
A storyteller and folklorist, Tom Muir,  tells traditional stories of Orkney (where he was born and brought up) and of the North. He has a great love for local traditions, a huge store of knowledge to share and his humorous delight in the humanity of the stories is infectious.
As storyteller and folklorist Tom is comfortable with all kinds of adult groups in whatever environment they meet and work. He also works with young people and children from the older primary age up, in schools and community venues.

Tom Muir was born and brought up in the Orkneys. He inherited all his mother’s stories from Westray and has researched and collected tales from all parts of the islands.

He has also trawled older collections and recovered stories that had been “lost” from current knowledge.

Tom will be over from Orkney for the whole festival and will not only be performing at the events but also leading the Story Workshop from 2-4.30pm on Saturday Oct 19th, along with Alex Patience. Call to book your place. 07599760798

Sandra TrainIn the introduction to her book A Memory Of Strath Halladale Sandra Train writes: " At the promptings of my husband and several cousins, I have been induced to set down my memories and to recall, as far as possible, how the life of a small Highland community seemed to me. This is a very personal account and is in no way a definitive study or an exhaustive one. Some readers will recognise both places and people; I trust I do neither an injustice. The title refers to the English meaning of the Gaelic place name of our home and its township which in my youth was "the hub of the universe". A local called it "a place of high men" having at that time within its boundaries, a Justice of the Peace, the post-master, the school-master and two elders of the Church! I have drawn mainly on memory, which is a most subjective source, when it is one's own. I have also relied heavily on the oral tradition of our area as it was passed on to me. Finally and most importantly, I owe a great debt to my mother and to my late father whose diaries I have dipped into for the Circle of the Year, to neighbours and friends who may see something of themselves in these lines".

Come along on October 18th to the ceilidh at Melvich Village Hall on Friday night and hear Sandra talk of the traditions and culture of the area and see what you recognise of yourself in her words. 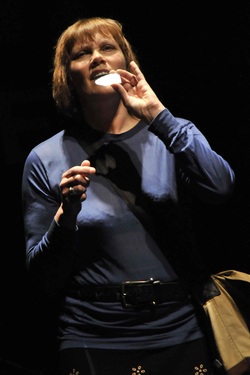 Alexandria Patience is a theatre professional who works extensively as a storyteller, performer, writer/collaborator & interdisciplinary artist. Born and brought up in a North East of Scotland fishing family, but with Hebridean family connections from North Tolsta, she is a strong storyteller and performer with the ability to speak directly to the audience and engage them.

She returned to Scotland ten years ago after a ten-year stint as the Artistic Director of Maenad Theatre in Calgary, Canada. She has worked predominantly with creating and performing new works for theatre. As a cross-over artist she creates audio art, installations, exhibitions, public art and mixed media performance works.

All ages fit for her stories and her storytelling workshops – working in communities with mixed ages and in schools, colleges, universities. Her background in devising performance means Alex is comfortable and trained to work with all ages in the process of creating and building performances based on personal and traditional stories. She has also created and trained young people to make podcasts and collects reminiscences which she has edited to create two audio art walks in Portskerra/Melvich on the North Coast where she lives. Creating performances and workshops outdoors and in site-specific places is a large part of her focus.
It’s important to Alex that the connection is made to allow the audience into the story and that it has a natural honest feel but is still compelling.

Alex will be hosting the festival and will be filling gaps, filling teacups and hopefully filling memories of a grand weekend in Portskerra/Melvich. 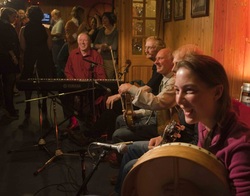 Clapshot were formed in 1999 and are a varying-number instrumental band, although they have been known to burst into song at odd moments. They play mostly Scots traditional tunes with a mixture of Irish and Cape Breton music and contemporary tunes in a traditional vein.
They do possess a PA, but prefer to play unamplified in smaller settings, whether for concert performances or dancing, in and around Caithness & Sutherland.
Personnel:(but we'll see who turns up)
John Saunders - Border pipes and Scottish small pipes
Dave Broughton - (ex Druids) fiddle, concertina
Danny O'Hagan - guitar
Katy Malone  - bodhran, whistles
Donald McNeill - tenor banjo, keyboard 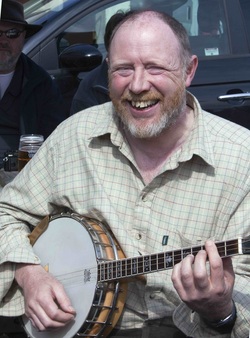 Donald McNeill  Donald has been active across several genres on the Caithness music scene as a composer and performer since taking early retirement from the medical profession in 2003.

In addition to being an experienced performer, he is an arranger, improviser and prolific composer of traditional-style folk music which he now uses when collaborating with Alexandria Patience in creating sound for storytelling performances. They tour festivals and performances venues.

Founder member of Caithness-based folk band Clapshot since 1999, playing tenor banjo, keyboards and guitar. Clapshot released their cd “Well Mashed” in 2010 at a performance for the Royal National Mòd Fringe, including being the ‘house band’ for a live TV appearance. The  “Well Mashed” cd (co-produced by Donald) contains many of his own compositions.

Donald will be performing with Clapshot at the Friday night ceilidh but will also be performing with Alex Patience, giving his creative musical support to weave another thread into her stories on the Friday and on the Sat night at Once Upon a Journey...
Gann de Ghaisgich - 2013 Wigtown festival Gaelic Prize Winning Poem

ged a thig luaidh air an cruadal `s a’ chàs;