Portskerra International Storytelling Festival is brand spanking new - be the first to make contact with us and say HELLO... or tell us a story 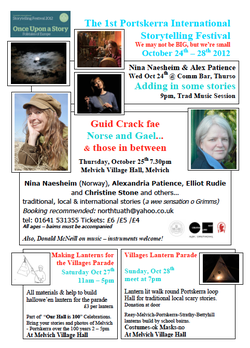 OCTOBER 21ST 2012  IS THE WEEK OF THE FIRST EVER PORTSKERRA INTERNATIONAL FESTIVAL
Check out the schedule below and come along to join in.

Portskerra Storytelling Festival – on the North Coast of mainland Scotland

The small and the large, the rural and the urban work together, and so in the tiny old fishing crofting village of Portskerra we will host a north coast international storytelling festival from Wednesday October 24th – Sunday October 28th 2012.

Special guests Nina Naesheim, the fantastic Norwegian storyteller & *Tom Muir from across the Pentland Firth in Orkney supported by a group of North Coast storytellers, including the host, Alex Patience from Portskerra, will share traditional and local stories of our heritage of Norse, Scots and Gael. With a wee nod to the Brothers Grimm and to Hallowe’en.


* Unfortunately Tom Muir can no longer come on this international jaunt over from Orkney this time... but he will come soon...

Wednesday 24th October 2012 – Primary schools programme in telling stories and working together to build a village school lantern – which will be part of the Portskerra Sunday Night Lantern Parade, Oct 28th 2012. Schools workshops led by Nina Naesheim and Alex Patience

Saturday 27th October 2012 - 100 years there has been a village hall in Melvich/ Portskerra – How many stories could there be? Shine a light on them. An event where the community come together and tell their stories and those they were told by those who have gone before…

And a community lantern building workshop. All Ages – but under 16’s accompanied by adult. Come and listen to the stories, add your own and make a lantern to participate in the Village Lantern Parade on Sunday. All materials provided - £3 per lantern
Public Venue - Melvich/Portskerra Village Hall, 118 Portskerra. Melvich, Thurso. KW14 7YL (on the A836)
11am - 5pm but you'll need an hour so try to get there before 4pm

Sunday 28th October 2012 - Lantern Parade in costumes or not, around the village of Portskerra and back to the local Village Hall for a wee selection of the scariest of scary local stories by Jim Johnson & Alex Patience
NO MASKS.
Venue - Melvich/Portskerra Village Hall, 118 Portskerra. Melvich, Thurso. KW14 7YL (on the A836) - 7pm - Village Hall doors open at 6pm
Gather at Melvich Village Hall, safety preparation, lamps lit, walk around Portskerra loop and back to the Hall for a scary story or two.
Book place or Information: northtuath@yahoo.co.uk tel: 01641 531355
Donation at door to cover costs.

A storyteller and folklorist tells traditional stories of Orkney (where he was born and brought up) and the North. He has a great love for local traditions, and his humorous delight in the humanity of the stories is infectious.

Nina lives in her hometown, Stavanger, in Norway and has been a profesional storyteller for many years. Her favorite Northlands stories are often about the sea, mermaids and selkies..but also stories from the Norwegian mountains about the trolls and huldra. Lively and strong stories! She likes to spice her tales with a dash of music and song.

A multi-disciplinary artist and storyteller who lives on the North Coast and who enjoys weaving people and ordinary life (and the extraordinary things that happen) into her art, her storytelling and her community.

Elliot Rudie is a unassuming visionary who crosses borders between the Nordic world and the Celtic one, whose mind is captured by the dreams of the Skalds. He interprets the local stories still found around us in the rocks & the landscape and the idea of north as a central crossroads and a very interesting place.

A local Gaelic radio broadcaster, singer and writer will tell Gaelic tales. May even be persuaded to sing. A brief English summary can be provided.

(Please check back for more information as we go along and as I get better at making the web site... )